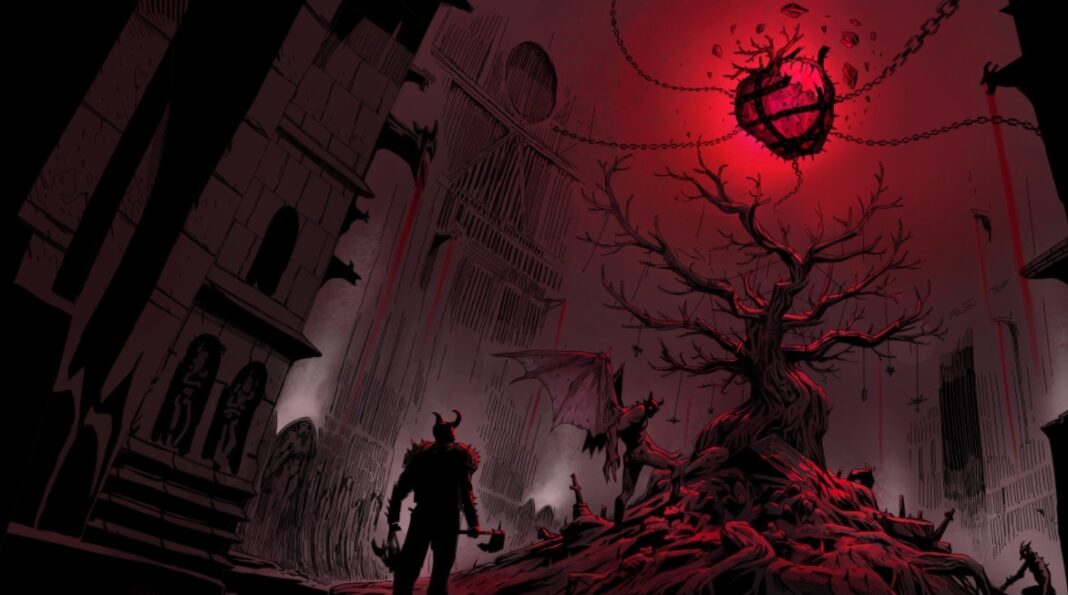 Developed by the French studio Ars Goetia, we presented Hellslave to you during the Steam Neo Fest. And since the studio is French, we took our chance to discuss about this dark fantasy set dungeon crawler with the person behind it, Baptiste Miny.

Can you introduce yourself? (name, age, professional formation…) What is your role regarding Hellslave?

Greetings. My name is Baptiste Miny. I’m 28, I’m a writer, designer and programmer in my studio, Ars Geotia. Apart from music and marketing, I’m in charge of pretty much everything here.

How did the idea of the game come to you?

After I released my point’n’click game, The Blind Prophet, I started replaying some childhood games: Diablo 1 & 2, WoW Classic, Warcraft 3, and all those gave me the idea of creating a “classic” RPG with turn-based combats, customization, loot, exploration and above all a huge liberty regarding the visuals, the creation of the universe and everything narration-related.

What were your influences for the game’s development?

The main ones would be Diablo 1 & 2 and the Persona series. For the universe, the Dante’s Divine Comedy and John Milton’s Paradise Lost were huge inspirations for me. Artistically, it was artists like Zdzislaw Beksinski, Mike Mignola, William Blake or Sergio Toppi.

How did the development go and how long did it take?

The development was rather chaotic at the beginning, since I was looking for a way to cleverly combine exploration and visual beauties. I did a lot of back and forth on prototypes and eventually chose some kind of “top-down” point of view where we can guess the contents of a room by looking at its illustration. Those two aspects allowed a good spatialization and made the conception of illustration and atmosphere more free and creative.

Moreover, I started something completely different after finishing The Blind Prophet. I had to put everything aside, as what came out of it didn’t fit me, and chose to focus on what would become Hellslave. All in all, it took me 6 months to come out with a satisfying prototype, and around 2 years and a half for the game to be almost ready.

What is the game’s roadmap? Where are you and do you know where you’re going?

The game’s almost ready: we are playtesting it, adjusting it, polishing it, and adding sounds and music. We are preparing it’s release and are starting to talk about it.

How many people worked on the project? What tools did you use?

How did the work with the other persons working on the game go?

As for the rest, it always goes smoothly with the other people.

The hardest thing in my case was to combine the gameplay decisions and the artistic pleasure. I’m an artist and I love drawing illustrations for my games. But you have to come up with an interesting result that remains fun gameplay-wise. As for the rest, I love RPGs and it was very pleasant to work on weapons, customize my characters during playtests and imagine new powers for combos and synergies. It’s rather natural when you are an RPG player.

I’ve learned a lot of things and I’m only waiting to get to work on Hellslave II to put all these ideas I have got and matured for months into the game.

What are Hellslave’s features? It’s length? It’s replay value? In the end, in which category can we put the game into?

It’s most peculiar feature is it’s visuals and the replay value that comes from a large panel of active and passive powers as well as the lots of equipment available to the player. The experience will last around 15-16 hours, plus the New Game+ and the Inferno mode.

The game’s clearly an RPG with lots of combat and exploration.

Is there a story? A lore that you have written for the game? What were your inspirations?

I’ve drawn inspiration from Milton’s Paradise Lost and the struggle between Heavens and Hell: it’s impact on humankind are a huge inspiration for me. I’ve taken a lot of pleasure in writing the scenario and all the lore attached to it with scrolls and places to visit, enemies, weapons, armours… I love when a game gives me things to read and chances to learn more about its universe: for me, it was only natural to give the same things to the player.

Were the critics good? The player’s critics?

For now, the demo gathered a lot of positive reviews, but it’s rather short, so I’m waiting impatiently for the game to get released to get the opinions of players and tweak the game for the long months to come.

For me, RPGs offer the players the chance to live the adventure they want in a given world, or live a given adventure but as he wishes. Hellslave falls into the latter, since the story is linear and does not offer any choice. But you will be able to play 6 different demons and a lot of different builds, which will allow you to play the adventure as you see fit.

My favourite RPG would be Vampire The Masquerade: Bloodlines. I also love Persona, Fire Emblem, Diablo, Warcraft 3, WoW (vanilla), Sunless Sea or also Stalker: Call of Prypiat or Blood. To me, the atmosphere is one of the most important things in a videogame: it’s music, it’s immersion, it’s felling.

One last word for the readers? Perhaps you have something to tell us (about DLCs, projects about the game or anything else)?

Long live RPGs! I hope you will all like Hellslave, that you will like it’s visuals, the adventure, the combats. It takes place in an extended universe I’m planning to develop for years to come. Thanks for your attention, and see you soon!

Thanks for your time Baptiste Miny, and good luck for the future!